Morneau and Trudeau are looking out for the rich

The finance minister’s company has been involved in converting workers into riskier pensions, which of course haven’t affected managers.

There’s lots of lamenting about the way the rich keep getting richer while ordinary folk struggle to keep their heads above water. Along with the lamenting, there’s usually some resigned muttering about how it’s all just part of today’s global economy.

But there’s a much simpler explanation: our governments keep passing laws that make the rich richer and ordinary citizens poorer. 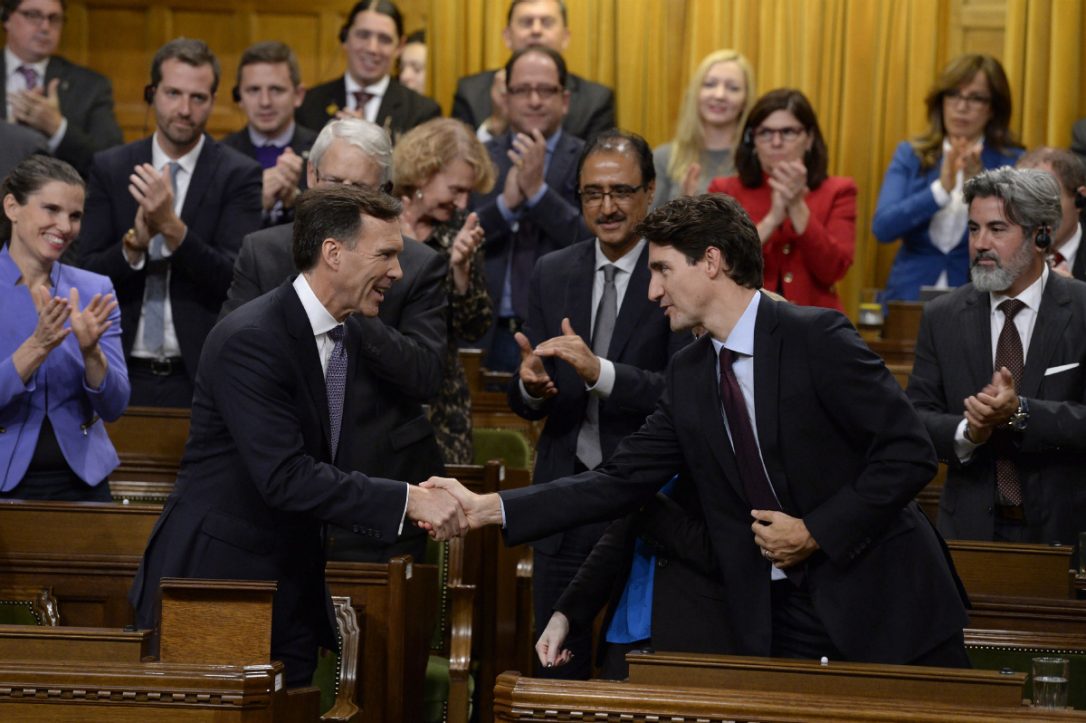 An example of this is currently being played out in Ottawa as the Trudeau government — ostensibly a “progressive” government that champions the middle class — is moving forward with legislation aimed at stripping away pension benefits from potentially hundreds of thousands of Canadian workers.

This story has been in the news mostly because of a subplot: Finance Minister Bill Morneau, who introduced the legislation, stands accused by both opposition parties of a conflict-of-interest related to his private business interests.

In fact, Morneau and the company he headed until entering politics, Morneau Shepell, have a long and profitable involvement in the pension issue, and the conflict-of-interest charge certainly deserves the attention it’s getting in Parliament.

In addition, however, there’s a bigger problem with Morneau’s pension legislation: it would allow employers — in federally regulated industries, such as banking, telecommunications, transportation and Crown corporations — to retroactively walk away from pension promises they’ve made to workers.

Certainly, Morneau’s legislation puts the Trudeau government fully on the side of corporate interests who, in recent decades, have been trying to take away hard-won workplace benefits that helped workers enter the ranks of the middle class in the early postwar years.

In recent years, corporations have been obliging their new employees to accept these riskier pensions, and in 2014, the Harper government pushed things farther in this corporate-friendly direction. It proposed changes enabling companies to convert old-style pensions into the new riskier format, effectively changing the rules in midstream for workers and retirees who’d spent years paying into their plans. Workers were outraged.

Justin Trudeau, then merely leader of the opposition Liberal Party, sided strongly with the outraged workers, denouncing Harper’s pension changes as “wrong in principle” and “unacceptable.”

But, after Trudeau became prime minister in 2015, workers were surprised when his new government quietly introduced a strikingly similar version of Harper’s pension changes.

Trudeau’s dramatic change-of-heart seems almost certainly connected to Morneau who, as head of Morneau Shepell before entering politics in 2014, had strongly favoured Harper’s proposed pension changes and stood to profit from them.

Indeed, Morneau Shepell had helped design, and provide actuarial services for, a similar pension overhaul carried out by the New Brunswick government in 2012.

The Trudeau government defends its proposed changes on the grounds that workers must “consent” to having their pensions converted to the new riskier format.

But this is like the “consent” given by women who get groped by a powerful boss; employers can get their unionized workers to “consent” by locking them out if they don’t agree to the pension change at the bargaining table.

Certainly, Trudeau and Morneau seem comfortable with today’s corporate mantra that workers can no longer count on things in the new economy. Learning to live with risk is the new black.

The corporate keenness to foist riskier pensions on their workers is not driven by necessity. Corporate profits have risen significantly in recent years, even as companies have switched to the stingier pensions that transfer all risk to employees.

Even fabulously rich corporations are adopting the new pensions — not because they can’t afford to pay workers fixed pension benefits like they used to, but because they’d rather not be obliged to do so.

Take the Royal Bank — with staggering profits of $10.5 billion last year. In 2011, RBC adopted the new-style pensions for all new employees.

But CEO Gordon Nixon didn’t feel the need to convert his own pension to the riskier model.

He retired in 2014, at the age of 57, with an old-fashioned, risk-free pension guaranteeing him $1.68 million a year. And when he turns 65 — no matter what happens in the markets — he can count on receiving an even more comfortable $2 million a year (more than $5,000 a day) for the rest of his life.

Risk may be good for those lower down the ladder, but for those at the top, guaranteed lifetime abundance still apparently has its place in the global economy.

Linda McQuaig is an author and journalist whose column appears monthly. She was an NDP candidate against Finance Minister Bill Morneau in Toronto Centre in the 2015 federal election. @LindaMcQuaig.