The extension on the $5.6-million rink was a sudden change from the plan unveiled a day earlier, which saw the rink set to close Jan. 1.

OTTAWA—The government’s rink on Parliament Hill will stay open an extra two months, but Heritage Minister Mélanie Joly skated around questions Thursday about how much that will add to its $5.6-million cost. 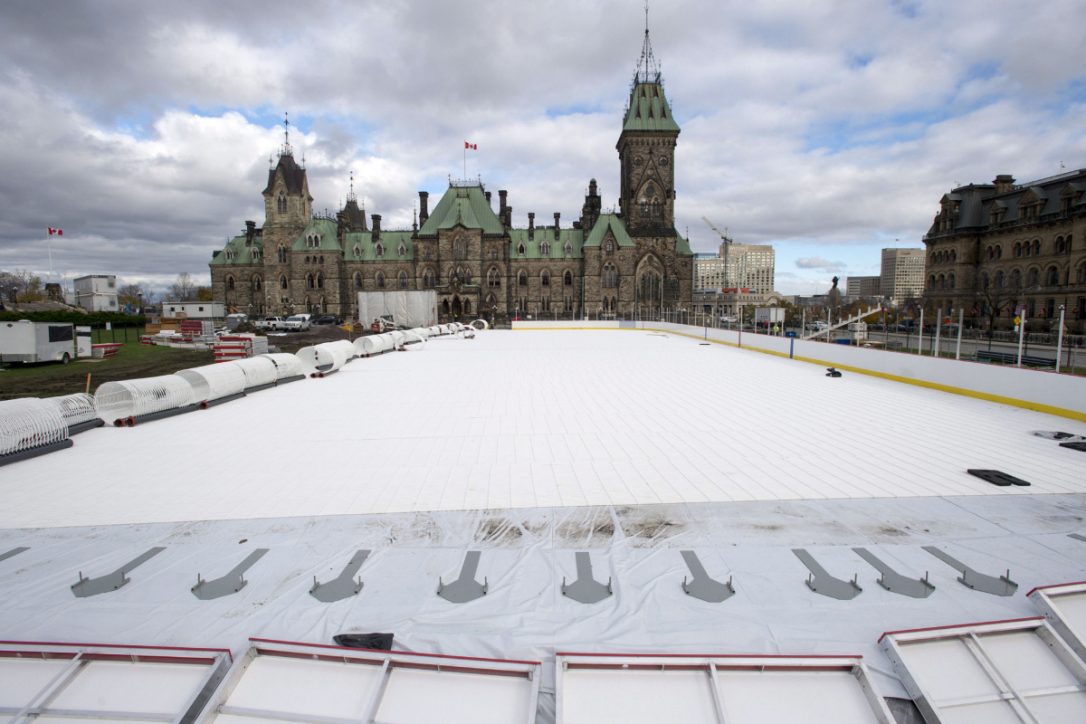 Joly made the abrupt change in the rink’s schedule one day after championing its original 26-day lifespan — Dec. 7 to Jan. 1 — as “really good news” and a great way to close out Canada’s 150th anniversary celebration.

She told reporters outside the House of Commons that the sudden extension to the end of February is because of an agreement with the parliamentary speakers, who have authority over events on the Hill, and will allow the rink to stay open during Ottawa’s annual Winterlude festival.

Joly refused to answer repeated questions about any additional cost, saying she’ll “have the chance to give more details on that later on.”

The “Canada 150 Rink” is being built on the front lawn of Parliament Hill. Complete with boards, glass, a cooling system and bleachers, the rink will host a children’s hockey tournament and other programming in December, as well as free daily skating sessions for the public.

But an initiative that could seem as likely to succeed as a scoring an empty-netter started raising eyebrows when it was revealed that it would only be open for less than a month. At a budgeted $5.6 million, the cost broke down to more than $215,000 for each day it was initially slated to be open (that number, with a new timeframe of 84 days, is now $66,667 per day).

Joly repeated Thursday that, once it is taken down, the rink will be donated. She previously explained the plan is to give the boards and glass to a “vulnerable” community in the Ottawa-Gatineau region.

While the timeline for the rink has been extended, a list of rules remains unchanged. No hockey sticks or pucks will be allowed during public skating sessions, according to the rink’s promotional website which also boasts an artist’s rendition of the rink with — wait for it — skaters with hockey sticks. Skaters also won’t be allowed to use cellphones, or eat food on the rink.

“Multiplayer games” such as “tag and races” also won’t be tolerated, the website says.

To get on the ice, people must book free tickets online two days in advance. These public skating sessions will last 40 minutes each.

Officials who briefed reporters about the rink Wednesday said the government expected 40,000 people to use the rink during the original 26-day period.

New Democrat MP Alexandre Boulerice said that even though he supports the rink idea, the $5.6-million cost has cooled his enthusiasm. He said the abrupt scheduling extension is no surprise because “we have a Liberal government that improvises most of its decisions,” and added: “What I don’t understand is why we have a rink with boards, but we’re not allowed to use hockey sticks.”

Pierre Paul-Hus, a Conservative MP from Québec, echoed Boulerice’s concern about the rink’s cost, calling the project a “waste of public funds.”

A budget breakdown provided this week by Canadian Heritage, the department that organized the rink, broke down the $5.6-million cost like this:

Joly’s press secretary, Simon Ross, told the Star Thursday that “it’s too soon” to say how the extension will affect these costs. He referred other questions to the heritage department, which did not respond with more details on Thursday.

Outdoor rinks in Toronto cost $800 to $1,000 a day that they’re open during the winter season, city spokesperson Jane Arbour said. That includes maintenance and ice clearing, as well as staff costs, she said.

The Parliament Hill rink is set to open to the public Dec. 7 at 9 a.m.